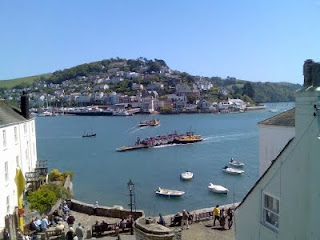 We were in Dartmouth about 4 years ago, presenting a day of music workshops at an elementary school for the Dart Music Festival. The talk at the time was "must have you back to perform at the festival itself" or words to that effect. But of course we weren't going to be on this side of the ocean at the right time for it the next year, and these things soon get forgotten.

Four years later, here we are at last! We trusted the satnav to bring us in, so unexpectedly ended up taking a little ferry across the Dart to finish our journey into Dartmouth. But that was ok - we're used to ferries. This one was something different, though. It's just a floating platform that holds about 8 cars plus a few bicycles and pedestrians, and gets pushed across the river by a tug moored to the side of it. This first picture shows a ferry heading in each direction. The town rises up steeply from the waterfront; this photo was taken from the next street up from the quay. 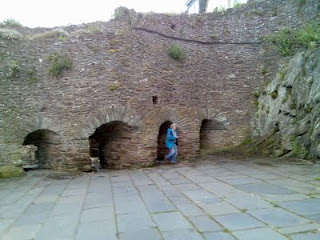 The three people in the first picture about to disappear behind the building on the right of the photo are heading towards Bayard's Cove Fort. 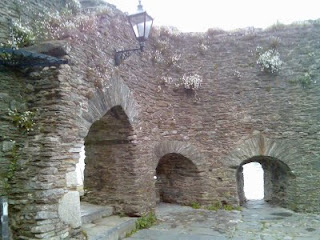 We visited on our first trip here, and Mike's immediate reaction to seeing it was "this should be a music venue". So guess where our stage was at the festival...

It was an amazing place to play, with its row of archways looking out over the river, a solid wall of rock at our backs and only one entrance/exit - the one with the steps coming in from the left, with a big lamp over it. Too bad they couldn't have some seating in place. Anyone who wanted a seat had to bring their own. Our morning show - a family friendly tour of world music - was in a very nice, very modern arts center auditorium. And we had a look at another venue for some of the festival shows that we both thought was spectacular. I can't even begin to capture the elaborate detail of this ancient church with my little camera phone. The acoustics are just amazing. And there were seats! Maybe next time... 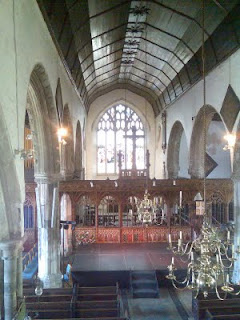 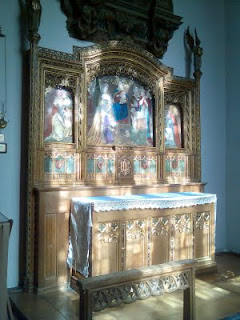 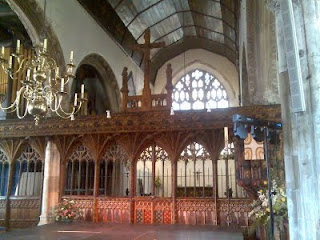