If you've been trying to follow this saga, sorry about the long gap! After I finally got the call from Continental's Customer Care Office (mentioned in the previous posting, August 28), I didn't want to publish anything that might prejudice any case I might make against them. I thought many times about what I could say, and finally decided the safe route was to say nothing at all for the moment.

But if you've read this far, you deserve a conclusion of some sort, so here you go:

August 26:
PHONE CALL #4 (Baggage Resolution, Houston) A week after the nightmare at the airport, I finally gathered the courage to phone the Baggage Resolution number again. I spoke with Mario, who again said that if Mr Cook will do nothing then there is nothing to be done, that the advisory number I had been given did nothing more than give me 14 days after my flight to present my damaged instrument at SeaTac, and that my only course of action would be to return to the airport and try again. He even tried phoning the SeaTac office directly to see if he could get them to talk with me, but they wouldn't.

I told him that the only way I would feel safe returning to the baggage counter was if Cook had been removed from his position as manager there, and I asked who to talk to about that; he gave me the number for Customer Care.

PHONE CALL #5 (800-932-2732): Maria logged my formal complaint against Mr. Cook and gave me a case ID number, but said there was nothing she could do about my loss. The only further action she could suggest was to send complete documentation of the incident and expenses to the customer care office in Houston. She also said that according to 'corporate policy', they would not give me any information about what action was taken, but assured me that action would be taken.

August 27:
I assembled a package of the entire story, documentation, photos, and a bill for the damages plus related expenses (mileage, ferry tolls, parking, etc). In my letter I asked for two things - remuneration and an apology for the way my complaint has been handled. Here's the closing statement of my account of the incident to them: "I was, and still am, absolutely livid, and very confused at how anyone can stand in front of a wall emblazoned with the words 'Baggage Service' and treat a distressed customer in such a disgusting manner."

August 28:
Surprise, surprise. I got a phone call from the Customer Care Office. Stacey seemed to have no knowledge of the document I had just sent. She was responding to Mike's complaint via their web page nine days earlier, when I had just been evicted from the Seattle baggage desk under police escort. She stated quite plainly that Mr. Cook had been wrong, both in his failure to take in policy changes required by the Montreal Convention (which has only been in place for about ten years), and in his inappropriate use of the police to remove a customer he was supposed to be helping. She also said that they've had similar complaints about the Seattle baggage desk in the past. She was going to contact the General Manager at Seattle Airport and tell him that this needs to be dealt with - and that Mr. Cook should not be involved.

August 29:
An email arrived from the CEO's office: "Per our Contract of Carriage, Continental is not liable for damage to musical instruments...". Also expressing "regret" for any "perceived rude behavior" I experienced. This was sent 10 hours after the above phone call, so I thought they were going back on what they had just told me. And referring to misappropriation of police authority to intimidate a customer as "perceived rude behavior" just made my blood boil.

Fortunately I took a couple of days to cool off before I reacted to this, by which time...

August 31:
Mike has just arrived from Ireland, and we're about to leave for a festival across the mountains. I get a phone call from the Seattle Airport Baggage desk, offering to pay up to their limited liability under the Montreal Convention (so now they know it exists...) This is roughly 70% of the replacement value of the instrument, or of the repair estimate. I'm asked to decide whether to have it repaired, in which case they'll pay the luthiers up to this amount, or to buy a replacement, in which case they'll reimburse up to this amount when I present proof of purchase and they take possession of the broken instrument. In either case, the shortfall is my problem; they're not interested.

I'm not convinced that I should settle for this. After all, the Montreal Convention caps the airline's legal liability, but it certainly doesn't prevent them from paying the full amount of the damage if they choose to. That part is entirely at their discretion.

But at least I've been assured there's some money coming in to help with this. I don't trust Continental to follow through, since they seem so uncoordinated and unhelpful, and more specifically because they flatly refused to put anything in writing, even so far as an email, and did not want the conversation to be put on speakerphone for any additional witnesses to the promise. I don't want to delay; I look into my replacement or repair options. There are no Chinook model hurdy gurdies currently for sale. There are other makes and models that come in a similar price range, but again, none available right now. If I get an instrument with a different keyboard, I have a lot of re-learning to do, and I love the sound of the Chinook, so I really have to opt for repair.

September 12:
With great relief, I finally get my gurdy to Olympic Instruments for repair. It had been waiting for four weeks.

September 22:
Olympic Instruments, after much hassle and chasing, managed to extract the promised payment from Continental (less a 3% credit card transaction fee), having completed the main portion of the repair: the top has been replaced. The instrument is still being re-finished, a process made frustratingly slow by damp weather as each layer of lacquer has needed extra time to dry. Next, it still has to be re-assembled and adjusted.

October 17:
Another phone call from Customer Care. This is the professionally placatory Sharon, calling to make sure that I've been taken care of and (the question she sidled up to several times) that I'm not planning to make any further claims against Continental over this incident. I didn't make any promises. She sent me a $300 travel voucher 'as an apology.' I explained that while I appreciate her apology, it's no substitute for an apology from Mr. Cook who committed the offense, and that a travel voucher can't help make up the $800 gap between the damage done by Continental's baggage handlers and the damages the airline has paid out.

Am I going to make any further claims against Continental? After what I've had to go through to get anything out of them at all, after being treated like a little bitty insignificant customer who should just go away when they don't want to deal with me, I feel that they deserve every bit of grief I can give them, but I don't know that I want to put any more time and energy into it. They have covered their legal, if not their moral, obligation over the damaged instrument. I suspect I could make a case for personal damages, corporate malpractice, intimidation, misappropriation of police authority...
Ask me later.

The important thing is she's back! 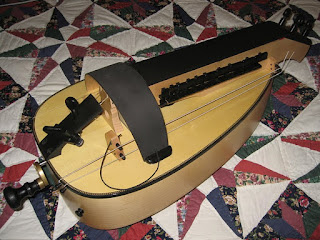