Highlights of the 2011 UK Tour

We've been back in Ireland over a week already, and I haven't begun to sort through all the pictures I took on the UK tour. Didn't get much opportunity for posting along the way, so I'm just going to post a fairly random selection of snapshots of the trip here. 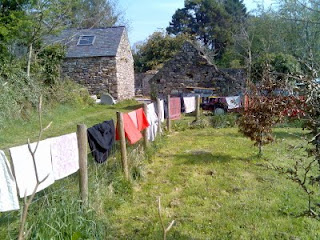 One last load of laundry before we go. The weather was so nice in the week before we left we never even had to use the dryer. That's unusual for Ireland!

I didn't get any pictures of the lovely Arts Center in Glasgow where we had our first performance, but you can see some here. 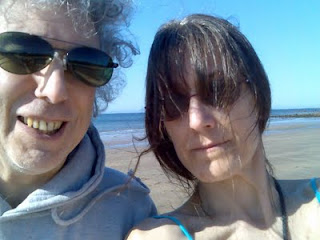 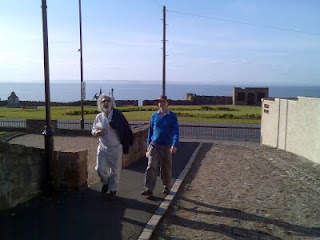 After that we had a few free days to spend by the sea with two wonderful friends in Prestonpans, just the other side of Edinburgh. Okay, I know it's the Firth of Forth, not the sea, but it feels like a seaside holiday to me. Steven and Elizabeth and their sweet cats Midnight and Zorro have become part of our extended family on the road.

Our next gig was up in Fife. Steven and Elizabeth had been talking for months, since we first posted the date on our calendar, about making a pilgrimage to the famous Anstruther Fish Bar. Didn't sound like the best idea right before a concert, but the perfect solution presented itself... Stay at S & E's friends' house in St Andrews before the show, so we can pig out on fish & chips the previous day. Also turned out to be a great opportunity for a walking tour of St Andrews, which we'd never spent any time in before. 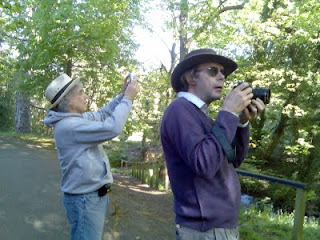 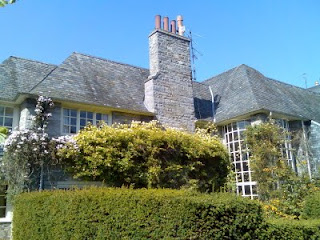 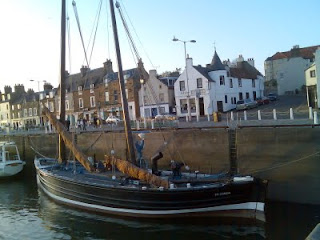 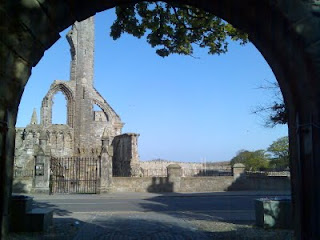 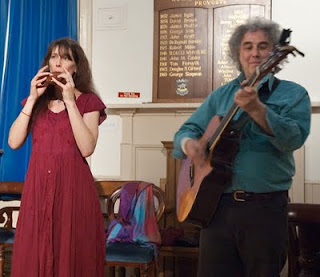 Anstruther Fish Bar (behind the ship).

The concert in the Town Hall in Crail was great fun, and Steven was right there on the front row getting pictures of everything we played on through the evening. Here's the double ocarina. And of course, Mike's lovely Larrivee guitar. In addition to all the instruments we brought, one of the resident performers played a couple of pieces on nyckelharpa. Wonderful! 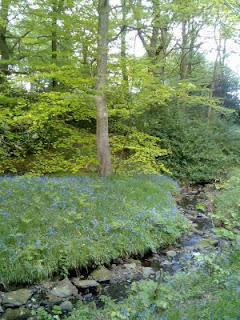 We had a short stop in Yorkshire next at another of our UK home bases - Birdsedge. Perfect timing, too; the bluebells were out to greet us.

So then, we had a little extra time before we had to be in Dartmouth for Dart Music Festival (fortunately; that's a long drive). 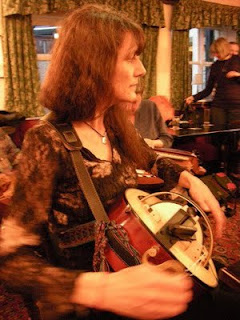 And talk about perfect timing... There was a hurdy gurdy festival that weekend, right along our route. Okay, it wasn't the main route we would have taken otherwise, but I wasn't about to pass up the opportunity to sit in a pub and have a jam with roomful of gurdy players! (Thanks to Bridget for posting this photo on the UK Hurdy Gurdy forum).

Dartmouth was the one stop on the tour that I managed to do a post about, so I'll skip that and move along... 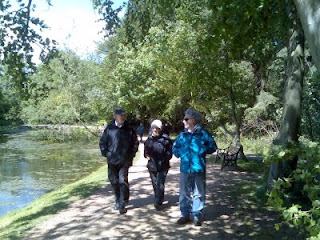 Our next two shows were within easy range of, yes, another home on the road. John and Joy took us for a walk around the lake in a nearby park, formerly the grounds of a stately manor house. The house is now a hotel, and the lake is home to many birds. 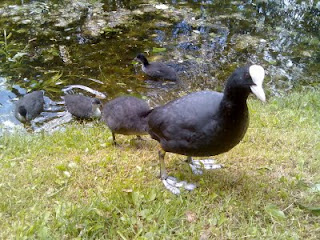 All the baby grebes wanted to see if we had food for them, but their mother didn't want them talking to strangers. 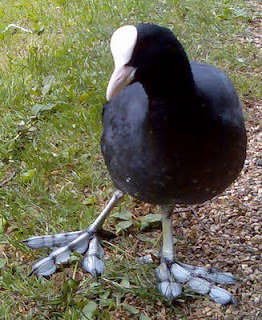 Just look at her amazing feet! 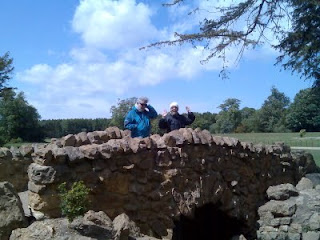 And another special treat - one of the resident players at Stockton Folk Club brought his hurdy gurdy. Which would have been a great chance to jam together, but mine's a G and his is D... Well, all the gurdy players will know what I'm talking about!

Anyway, continuing north, after a stop for our first ever show in Cramlington, we drove across to Allendale for a nice stopover with Liz and Terry. Who - would you believe - also had a friend who had a hurdy gurdy. So yet another musical evening fell into place on our night off. Dulcimers, both hammered and fretted, songs, Scottish small pipes, gurdies... Yay! 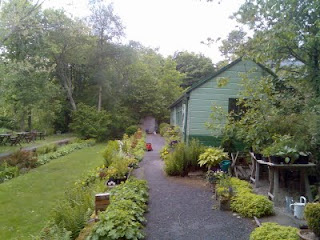 I'm realizing as I write this that we did a lot more walking on this trip than usual. Liz & Terry introduced us to yet another beautiful garden park, this one created from on old station along a former railway. 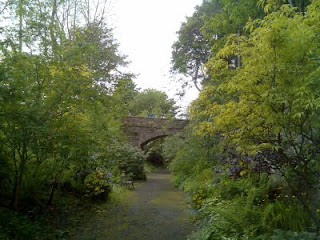 If you click on this second picture to enlarge it, you can even just make out Liz and me taking the high road while Mike and Terry walked along the rail bed below. 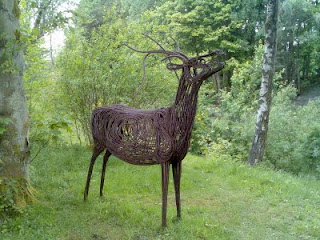 I was glad we decided to walk along the top of the cut, because otherwise we wouldn't have spotted this great rebar sculpture. 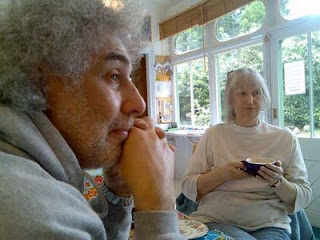 And then of course, when you've been walking in a garden park, you have to stop for a bit of tea and cake, don't you? This is England, after all! (So much for the benefits of all that walking.)


There was still one more stop, at a delightful acoustic music club up in Bellingham, but between drizzle and sniffles, the camera didn't come out again.

We made our way back to Ireland on a red-eye ferry, and here we are, back at work on the old stone house.
Posted by Tania at 10:35 AM No comments: