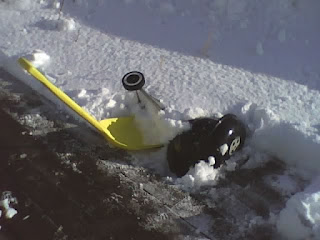 step 2: Find some tools to chip away the inches of ice under that snow. 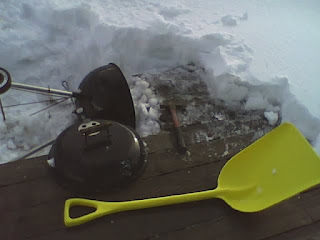 step 3: Let the big guy do it. It's his grill anyway; he's not so afraid of breaking it. 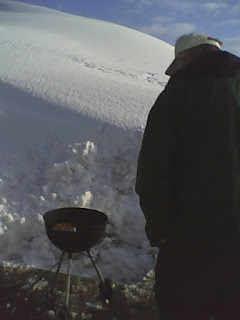 step 4: step back and take pictures while he gets the fire started and gets some food on there. 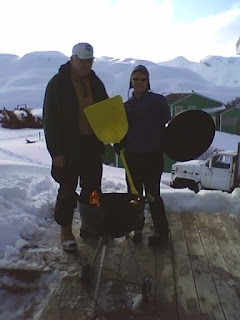 step 5: set up other cool stuff found while digging around for bits of the grill. 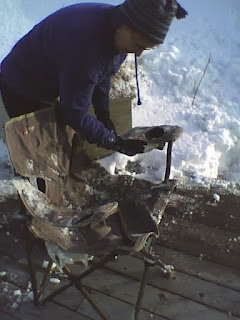 step 6: admire all the work everyone else is now doing. 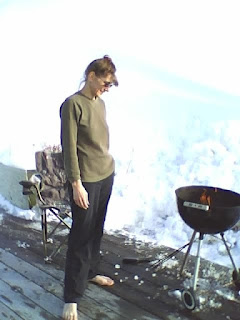 step 7: go see what Mike has been cooking in the meantime. 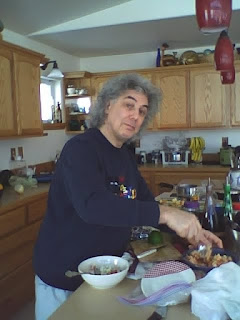 step 8: enjoy delicious food with really fun people.
(We have more pictures from this Dutch Harbor / Unalaska visit on Facebook.)
Posted by Tania at 11:51 PM No comments: 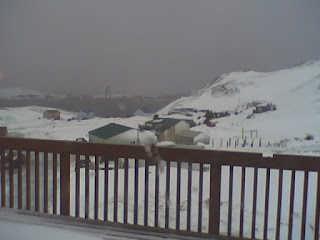 We arrived in Dutch Harbor two nights ago, on a flight that came in from Anchorage only two hours late. That may not sound impressive if you've never been out here, but we were very happy to get here on the day we'd planned, and very pleased that it was so close to the scheduled time.

For now, we are spending a quiet rehearsal day, indoors, staying warm and dry, enjoying the view of the slushy rain/snow lashed island from high on a hillside.

I've found an old email that I sent to a friend after our first trip to Unalaska/Dutch Harbor. Here's an excerpt:


December, 1997.
The day after Thanksgiving, touring began again in earnest. Anchorage gigs on the Friday, Sunday and Tuesday, then we were scheduled to fly out to the Aleutian Islands on the Thursday after Thanksgiving. Of course, ever since we booked this gig in Dutch Harbor, we've been hearing about how difficult it is to fly in and out of there, especially in the winter. Apparently, those flights have about a 50% cancellation rate. And then over Thanksgiving weekend the headline news in Alaska was all about the big storm, the wreck of the Japanese freighter and the resultant oil spill. The day we were supposed to fly into Dutch Harbor, they were having another storm with 100 to 130 mph gusts that were wreaking havoc with the clean-up efforts. Our flight was canceled. We returned to the airport the next morning, fully expecting the re-booked flight to be canceled as well, but they loaded us up quickly and took off. The plane bounced through considerable turbulence on the way in, and the aircraft-carrier style landing on the short landing field was just as abrupt as we'd been warned, but we were intact. First time I've ever heard a whole planeload of people break into spontaneous applause when the craft came to a stop!

I've been told all my life that the Aleutian Islands were barren wasteland. Well, they are pretty barren, I guess - not exactly teeming with big flora and fauna, but the geography of it is breathtaking. We had just enough of a clear patch to see where we were going during the landing, then the snow closed in for most of the next 2 days. Not constantly. It was fascinating how quickly it came and went. One minute there would be snow so thick we couldn't see anything but our immediate surroundings, the next minute we'd have clear blue sky, bright sunshine, and no sign of where the snow had disappeared to. In another 5 minutes, it'd be back to the snow.

The snow tapered off during our stay to where it was just plain clear and beautiful by the last day, and we took advantage of every opportunity to get out and see things. My cousin Mary who lives there and works for Fish & Game, took us out 4 wheeling (as far as the truck would go) and hiking to get up on top of the ridge where we could look down on one side at Unalaska Bay and the other side at the Bering Sea. She told us they don't normally get so much snow, but it had been falling for the best part of 2 days, and drifting on the mountain, so we were slogging through drifts that came at least up to our hips. Deeper, I'm sure, but that's how far we were sinking into them until we got tired of it and crawled over the top of the snow instead. I haven't had to do that since I was in high school!

Later that day we took the Coast Guard bus out to the oil spill. They were offering this service to the community because they'd closed off all access to the spill site, and were limiting the number of people in the area. It was an amazing and sobering tour. The ship was practically up on the beach -workers were wading out to it, pushing rubber rafts to unload equipment and potential contaminants. The oil congealed into such thick blobs when it got cold that they couldn't pump it or absorb it or do any of the usual things they do to clean up oil. They were out there with pitchforks and rakes, piling it into plastic-lined dump trucks to haul away for shipment off the island because they had no place to process or contain it there. They had bird scarers set up along the contaminated beach (the only sandy beach anywhere in the vicinity), and were keeping a close watch for sea mammals. Apparently they'd found some oiled birds, but the mammals were keeping well clear of the area. 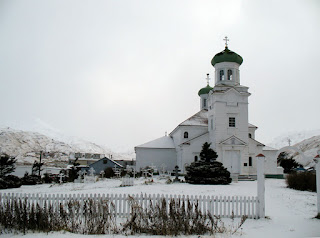 To cap off our Unalaska experience, we went to see the local Russian Orthodox Church, a lovely little wood-framed onion-domed structure which we'd been looking at each day from the window of our hotel suite. All the people who usually let tourists in to see the church were off-island at a church conference, but Mike was not prepared to be disappointed. He managed to track down the one remaining person with a key, who happily walked down from the senior center to show us around. More than that, he took us up to the bell tower. Mike obviously wanted to tap them. I thought it would be too much to ask, to ring the bells in such a small town in the middle of the afternoon, but our guide invited him to go ahead. Mike gave tentative tugs on a couple of the bell cords, sampling the rich sounds. Then this tiny old Aleut/Russian man [Nick Lekanoff] climbed up onto a platform where the cords to all the bells were fastened, put one foot on the bass bell cord, knees against the two tenor ropes and held the lines to the four treble bells, two in each hand. "Now," he said with a grin, "if you can jitterbug, you can ring the bells." And he started up a little dance which set all the bells pealing beautifully.

That was all we had time for. We had to pack up and catch our flight back to Anchorage, much as we would have liked to stay longer. After 1 whole day in Anchorage, we hit the road to Fairbanks this morning, and here we are. Phew. I need a rest again after WRITING about it, and I've noticed that this place has a huge tub with jacuzzi...
(from December, 1997)

So today we practice. Tomorrow, we'll see what new adventures Unalaska has in store for us.
(See the next post, and additional photos on Facebook)
Posted by Tania at 2:04 PM No comments: