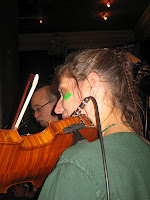 St Patrick's Day! It means so many different things to different people. In North America it's a big party - a connection with a cultural heritage, a national identity, and a land left behind.

To any musician with a chunk of Irish music in the repertoire, it's the end of the Winter lull and a sign that Summer festival season is just around the corner. For many years now, we've had a St Patrick's Day band with William Pint and Felicia Dale. There's quite a bit of Celtic material in both duos' repertoires anyway, and an additional list of songs that only come out for this once-a-year marathon gig. 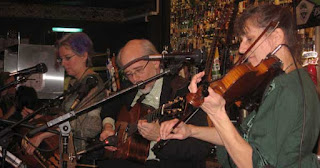 For the first few years, way back when, there were changes in personnel from year to year and the venue was a restaurant in Bellevue Washington, which closed long ago. The Bellevue Jake's band eventually settled into a consistent lineup (Tania and Gary Haggerty, from the original band, with William Pint and Felicia Dale) and picked up a name: "Hunter's Moon". Gary even stayed on after moving to San Francisco, travelling up for a quick couple of rehearsals and the gig. When that restaurant was sold, the band had a 10 year hiatus before finding a new home at F.X. McRory's, right in the middle of Seattle, with Mike stepping in to the lineup. 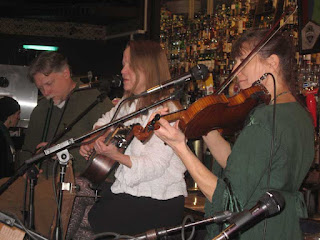 2012 presented a new challenge. St Patrick's Day fell on a Saturday, and several of the events that usually come in the week leading up to St Pat's got moved to the big day itself. The management wanted four hours of music on the Friday night, followed by an early start and nearly sixteen straight hours on the 17th.
Some musicians would have found another band to split the day with, but that would have left us with a much shorter St Pat's than we're used to... What to do? 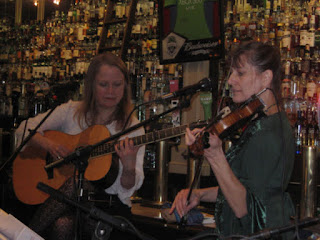 Fortunately, the wonderful Kat Eggleston, who played with us a few years earlier when William and Felicia were away on a UK tour, was available. And her partner / bandmate John Dally had a gig in Seattle later that day anyway. So-- Friday night with W&F, Saturday morning with Kat & John, then the rest of the Saturday marathon, back to William and Felicia! As you can see from the two photos Mike took of his three bandmates, it was a seamless transition. 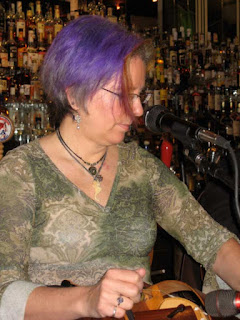 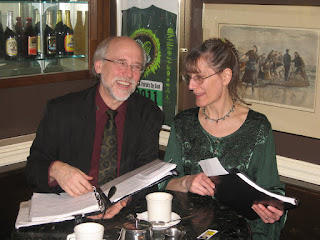 For these long gigs, a little advance planning goes a long way - knowing what we're going to do during the next set is more than we can expect, but we at least like to be faking it from the same notes!

Mike, of course, had the camera, so we got no picture of him even though he was in both bands. Fortunately, I found this picture from 2011 on F.X. McRory's Facebook page.